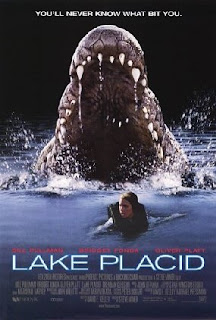 Lake Placid (1999) Long before the series was butchered by endless direct-to-video sequels, and the final nail was put in the coffin with 2015’s crossover Lake Placid vs. Anaconda, there was the original Lake Placid, which some people might not realize was a theatrically-released film.

If this title leaves a sour taste in your mouth because of the stinky sequels, I hope my review can refresh your taste buds, because if you’re at all interested in animal attack films, this one ranks extremely high on the must-see list.

It starts out with the local sheriff (Brendan Gleeson) accompanying a scuba diver on a mission to tag beavers in Black Lake, Maine. There’s an attack, and a tooth fragment is found that seems prehistoric in nature, which makes little sense, at first.

Turns out he’s right, and he thinks they can capture the beast without killing it. The unlikely group of individuals put a daring plan into action, and now there’s only one thing they need: bait. Okay, two things: bait, and a bit of luck.

, and in my opinion, one of the best killer animal films ever. Does is rank up there with Jaws? Not really, but it’s quite different from Jaws, and no, it’s not a rip-off in any way. Back when it was released, Lake Placid was financially successful, but it was not a critical favourite by any means. I honestly don’t know why people disliked this movie so much. What were they expecting? It delivers everything you could want based on the premise, plus a little more.

As I said in my Anaconda review, typically with these sorts of movies, the characters matter very little. With Lake Placid, the actors are good, and the characters are good, too!  Bill Pullman is a little boring, but he has some good dialogue.

Brendan Gleeson is great as the annoyed sheriff, always frustrated with everyone’s sarcasm, but his interactions with Oliver Platt are the funniest character moments in the whole movie. The entire cast has surprisingly good chemistry, and the banter back and forth is unusually quick and witty, making this a really funny movie, but not in a campy way; it’s genuinely funny!

There are a number of memorable quotes (“This wasn’t a bear attack, bears don’t attack people underwater.” “Probably a beaver, then.”; “I never heard of a crocodile crossing an ocean.”

“Well, they conceal that information in books.”) but the best line comes from Ms. Bickerman, played by Betty White, who’s the only person living on the shores of Black Lake. “If I had a dick, this is where I’d tell you to suck it!” She’s only a minor character, but steals every scene she’s in.

As funny as the script and characters are, they would not be enough to make this movie worth watching if the main threat didn’t deliver. Luckily, it delivers in spades. The crocodile animatronics were done by Stan Winston, famous for doing The Terminator, Aliens, Jurassic Park, and so much more. ดูหนังออนไลน์